I Notice: I noticed that all the tree's leaves were bright green, and were different than the other ones around it.

I Wonder: I wonder why the leaves of oak trees vary in size, texture, color.

This Reminds Me Of: This reminds me of the nutrient cycles, because the California Black Oak is deciduous, meaning it sheds its leaves every year.
Posted by DevonP at 9:51 PM No comments:

This project helped me see the world around me.  I made me go out, and look around me, to try and see the ones hidden in plain sight.  It taught me how to slow down, and look for the little things in life, because they may surprise you. 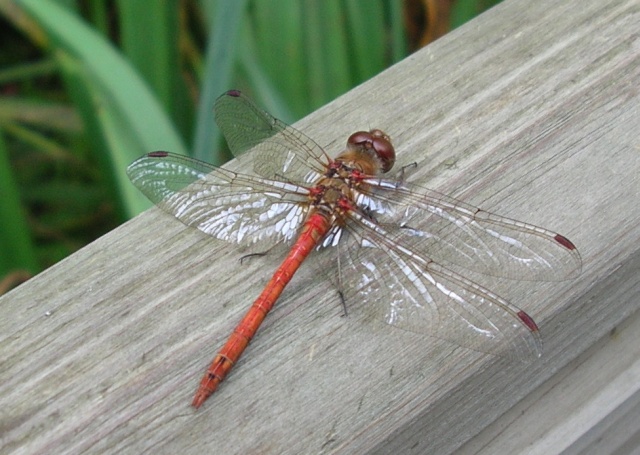 Besides all that, I learned a wide range of things from this project.  For example, I learned of the existence of damselflies.  They belong to Odonata, the same insect subgroup as dragonflies.  As you can see, the dragonflies and the damselflies may look similar, but there are a few key differences between the two.  The damselflies rest with their wings close together and their eyes are spread apart, while the dragonfly has its wings in the spread position when it rests and its eyes are right next to each other.
Now I also know that the things that I called "roly-polys" and thought they were insects, are actually crustaceans called pill bugs, and there are about 4,000 different species.  They are the only crustaceans to live on land and still use gills to breathe.  This project has shown that there's a whole world out there to explore, appreciate, and protect.
Posted by DevonP at 8:04 PM No comments:

I Notice: I noticed there were a variety of other species growing around it.

I Wonder: I wonder if the grass was prey for certain herbivores, and those herbivores were prey to rattlesnakes and these were supposed to imitate the "rattles".

This Reminds Me Of: This reminds me of adaptation because it requires a very specific environment for this type of "rattle" to occur.
Posted by DevonP at 5:58 PM No comments:

I Noticed: I noticed that the pill bug was always crawling under the tanbark around it.

I Wonder: I wonder if the pill bug is sensitive to fluctuations in temperature.

This Reminds Me Of: This reminds me of adaptation because this is the only crustacean that lives solely on land.
Posted by DevonP at 5:24 PM No comments:

I Notice: I noticed that it looked like a dragonfly at first but then it has its noticeable differences.

I Wonder: I wonder if the damselfly and the dragonfly are related, and if so, then how close.

This Reminds Me Of: This reminds me of common descent, that these species might both come from a shared ancestor.
Posted by DevonP at 5:06 PM No comments:

I Notice: I noticed that some of the flowers were budding but some didn't.

I Wonder: I wonder if the flowers never grew in that one spot, or it became detached from the plant either by natural causes or by other species.

This Reminds Me Of: This reminds me of reproductive isolation because these flowers must have been separated in the past to have developed different color flowers of the same plant.
Posted by DevonP at 7:27 AM No comments:

I Notice: I noticed that these flowers grew on a hillside, despite the location.

I Wonder: I wondered how the seed was transported there.

This Reminds Me Of: This reminds me of descent with modification, because being able to grow in different environments takes generations to develop.
Posted by DevonP at 11:46 PM No comments: